An investment in knowledge pays the best interest.

Benjamin Franklin was born in January of 1706 to a modest family in Boston, Massachusetts. Although he is most often celebrated as a Founding Father of the United States, Franklin’s accomplishments are diverse, including civic, scientific, and cultural projects which altered the course of American history. 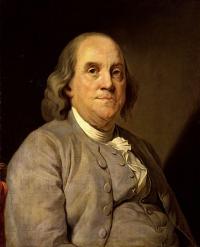 With a limited formal education, Franklin was effectively self-taught, and spent a significant portion of his early years in the newspaper business. He began by writing for his brother’s newspaper under the assumed name Silence Dogood. When he tired of reporting to his brother, he left Boston, visiting London in between his stays in Philadelphia. There, he started his own printing shop before gaining ownership of the Pennsylvania Gazette.

As Franklin grew older, he developed into a community leader. He played an instrumental role in the establishment of notable Philadelphia institutions, including a library and the school that would later become the University of Pennsylvania. Upon retirement, Franklin added yet another title to his list of accomplishments:  scientist. Through his famous kite-flying experiment, Franklin verified that lightning transmits a powerful electrical charge. To protect against lightning’s ability to set homes ablaze, Franklin invented the lightning rod, which was designed to extend above buildings and to redirect lightning’s energy into the ground.

Although Benjamin Franklin is best known as a Founding Father, he held this role later in his life. Franklin served on the Committee of Five that was tasked with drafting the Declaration of Independence. Within the group, Franklin is rumored to have been a jokester, and, according to some sources, it was because of his humorous tendencies that he was not allowed to write the Declaration.

Franklin’s work in guiding the country through its transition from British colonies to independent nation was invaluable. His Albany Plan made way for the Articles of Confederation, and he advocated for American rights against British tax impositions under the Stamp Act. His extraordinary diplomatic activity helped forge the American alliance with France during the Revolutionary War, and, when his side emerged victorious, he helped to draw up the Treaty of Paris.

Yale honored Franklin with the honorary degree of Master in Arts in 1753 for his scientific accomplishments. Starting in 1954, Yale became home to the grandest collection of Franklin Papers, or documents and images related to Benjamin Franklin, in existence. With the diligent work of a team of scholars, Franklin’s papers were collected and edited. Forty-one volumes of the papers have been published to date, and most of the works are housed in Sterling Memorial Library and the Beinecke Rare Book and Manuscript Library.

The Story Behind the Crest 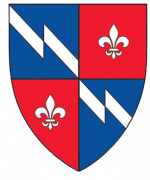 The Benjamin Franklin College coat of arms references Franklin’s uniting of many pursuits, from science and letters to handcraft and statecraft. The Bends rompu resemble lightning bolts, which represent his scientific explorations, and the fleurs-de-lys are a reminder of his diplomatic service in France during the American Revolution. Just as the heraldic emblem integrates Franklin’s passions and endeavors, it unites students of diverse backgrounds and interests in a strong and dynamic residential college community.